If there is one person who would hardly consider 2020 a horrible year it is Lkhagvadulam Purev-Ochir. For her, a Mongolian director and screenwriter from Lisbon, this has been an incredible year, but for widely different reasons. First there was the success at Locarno 2020, where her directorial project ZE won the Open Doors Grant and the Open Doors Award - Moulin d'Andé-CECI. Then the news came from Cannes, where her work Shiluus (Mountain Cat) had joined the official selection of short films. “It was something enormous and absolutely unexpected - she confesses - I wouldn't have even tried; it was the producer who suggested that it be nominated. When the news came from Cannes it was shocking, I had to have two other people read the email asking them to confirm what I had read. In Mongolia the young population is large and enthusiastic, and the filmmaking community would like to exchange with the international one, but the barriers are many and diverse. This is why the Cannes news was even more incredible and stimulating.”

What was Open Doors’ role on this journey?
“The first award (the Open Doors Grant, editor’s note), but in reality it was so much more. It was the place and the people who welcomed my project. They welcomed it sincerely, spending time with my film, listening to me and helping me, giving me advice. In 2019, I was there as a producer (at the OD Lab, editor’s note), but there was no lack of advice in terms of content. They read my project, took the time to study it and then to confront me. It was huge, if I think about the work they helped me do both at the production and script level. There, in Locarno, I found my two producers Ariunaa and Katia Khazak; Thibaut Bracq literally pushed me to meet Ariunaa, and told me ‘You have to talk to her now!’ and organized a lunch for me. One year later we were back in Locarno as a team with our project at the Hub and won the main award. Locarno in general was an experience difficult to describe; Open Doors has been able to build a real community of people and regions from Asia and this is very important for Mongolia. We are geographically strange, we are not Central Asia, we are not Southeast, and we are not North… Bringing us into this situation and this comparison has allowed us to connect to other cinematic references that are not Korea and America. Personally, it opened my eyes, showing me that extraordinary films have also been made in South East Asia.”

I would like small films that represent us beyond Genghis Khan. Our history is much broader than what is perceived.

A young population and ancient history. How does this relationship translate into cinematic reality?
“We are full of historical, patriotic films, but the truth is that we are still looking for our identity, and history is precisely where we are looking for it. We are progressive, the gender equality index is high, we have no religious barriers, we live in a democracy and have a Western lifestyle, but at the same time we are in Asia and cinematically, for example, one of the greatest references is Korea. We are extremely hybrid, to get an idea just go to Ulan Bator and find yourself amongst signs in many different languages.”

And what can all this become in the cinema?
“Small films that represent us beyond Genghis Khan. I would like our low-budget, extremely local films to hit the global market by explaining who we were and who we are. Our history is much broader than what is perceived, and it is uncharted territory.”

Small films?
“Yes, I think it's the only way to make them work. Many giant films have already been made for entertainment. Now I would like films that are extremely focused on culture and certain particular environments; films that are difficult to replicate outside of here, that know how to tell what Mongolia is, here and now. And I'm sure they would be the only films that could work globally.” 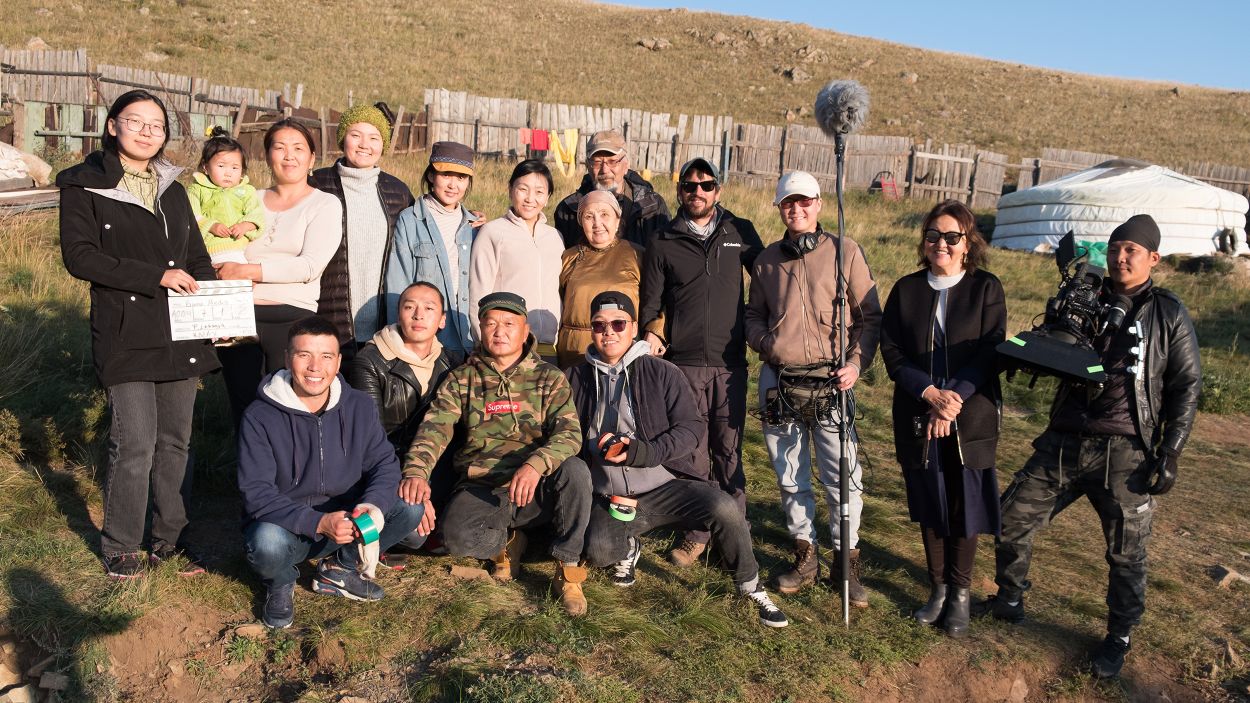 The crew of Mountain Cat, by Lkhgvadulam Purev-Ochir (2020)

You have been living in Lisbon for some time. What would you bring of the European experience to Mongolian cinema?
“The attention and care for writing. I think it is a moment of the film process that is scarcely considered in our country, if not ignored outright. We have film schools, but no screenwriting departments, and it is a void that must be filled, absolutely. There is no shortage of film schools, but in my opinion they should focus more on the quality of teaching than on the number of students. A directing class should have a maximum of 10 students, but we have 40 per year. Where will they work?”

How do you picture the future of Mongolian cinema?
“As a hunter of little big stories of everyday life. I would like to feel represented; many Mongolians live completely different lives from those portrayed by foreign filmmakers who make films about Mongolia. I would like to reach those stories, those representations, and bring them to the screen.”

Read the interview with Uran Sainbileg