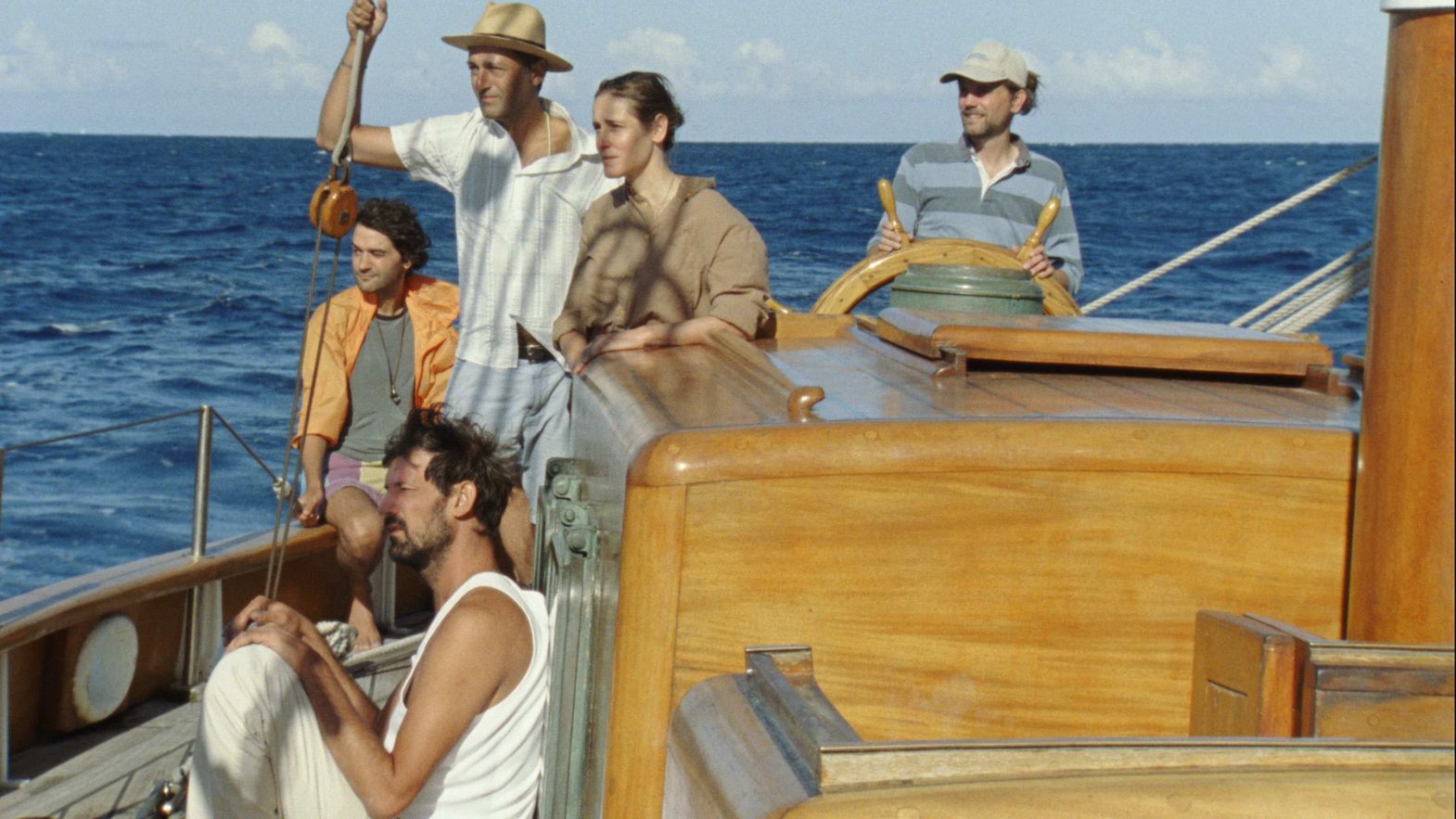 “Consider the subtleness of the sea; how its most dreaded creatures glide under water, unapparent for the most part, and treacherously hidden beneath the loveliest tints of azure,” wrote Herman Melville in Moby Dick, his paean to the might of the sea. Melville is not one of the authors whose texts the characters quote in Helena Wittmann’s second feature Human Flowers of Flesh – these include Marguerite Duras and Friedrich Glauser – but the ravishing beauty of the film’s blue waters is indeed deceptive, concealing not literal monsters but painful histories.

One of the first images seems to be a promise of adventure: in a breathtaking panoramic shot of a limestone cliff running along the water, a group of hikers make their way towards a sailing ship anchored in the distance. We soon learn that the woman leading them is called Ida (Angeliki Papoulia), but we don’t hear her speak. She watches and listens to those around her, who share stories that have the ring of legends. Even when someone talks about Ida, she sounds like a mythical character: “There is a boat in Marseille. Owned by a woman. She lives there with her crew… Not much is known about her. I imagine her life very free, always in movement.”

Although Ida does embark on a quest, the film is pervaded by a melancholy that belies the allure and deceptions of romanticism. Aboard the ship, the crew speaks French, Italian, Portuguese, Greek, Arabic; they stop in different Mediterranean ports, but the nature – shot by Wittmann in sumptuous and sensual (16mm) images – remains constant, making it difficult to tell the locations apart. This fluidity contradicts the reality of national borders and, by highlighting their artificiality, impels reflection about the innumerable lives risked and lost because of these separations, in this body of water and elsewhere.

Ida keeps visiting bases guarded by members of the French Foreign Legion. What is it about the uniformed men that fascinates her so? The Legion, too, is multi-ethnic and polyglot, but its image and history are inextricable from the violence of colonialism. Its very existence is anachronistic, as is the masculine myth that it represents, yet both persist. When Ida’s search eventually leads her to a légionnaire played by Denis Lavant – who famously had the same role in Claire Denis’ 1999 masterpiece Beau travail, a hugely influential work for filmmakers of Wittmann’s generation – Human Flowers of Flesh becomes explicitly self-interrogating. If Ida can be read as an alter ego for the director, what should we make of her reaction when she finally comes face to face with the object of her desire?