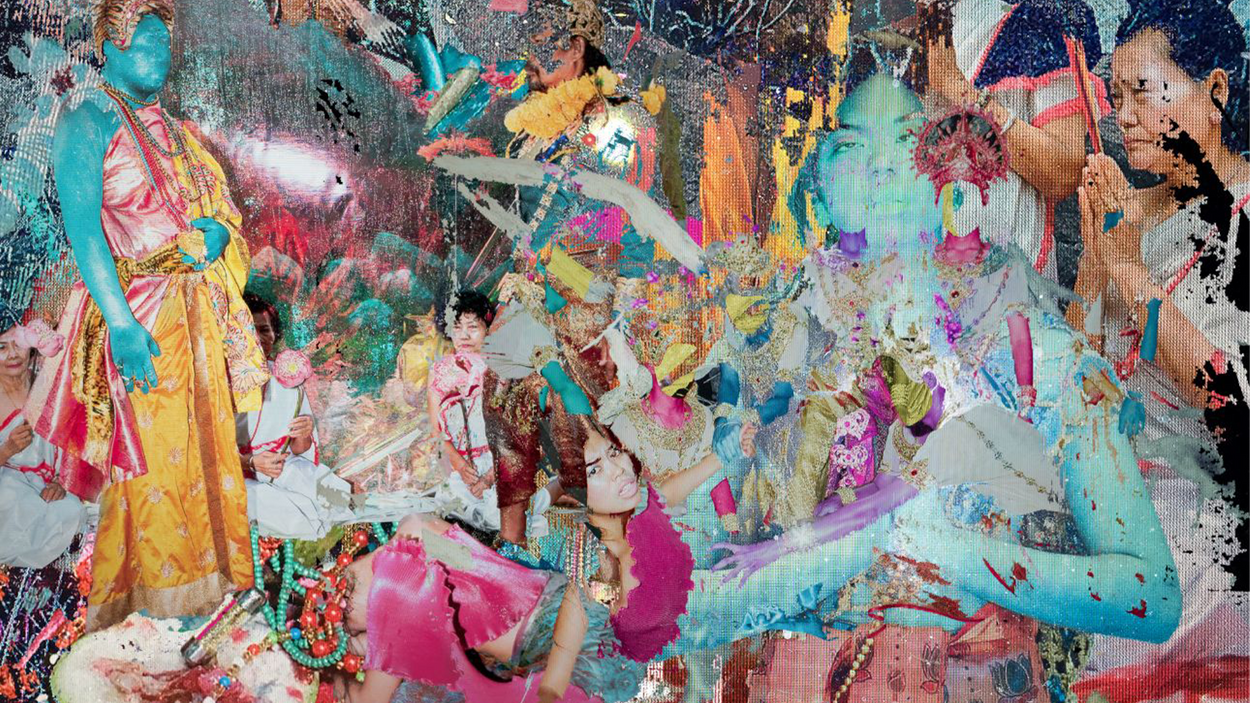 MARCH and NAT are a happily married couple in their mid-30s, with Dot, their 7-year-old son. March runs the family-owned vacuum-cleaner-manufacturing factory. One day, Nat dies of respiratory disease caused by air pollution. Saddened by the death of his wife, March is worried that the same fate would fall upon his son, who gradually develops similar symptoms. Concerned with her son’s health, Nat returns as a ghost haunting the vacuum cleaner at the house. While everyone is afraid of her as the possessed vacuum cleaner, only her husband sees this as the chance to reunite the family. Nat-ghost tries desperately to get rid of dust in the house until she realizes that apart from these unwanted small particles the family is also stained by other things: the ghosts of dead laborers that had died at the family’s factory.

Thailand is a country full of ghost tales and one of the most enduringly popular is the story about the love between a human and a female ghost such as Mae Nak Phra Kanong. I find this taboo relationship between human and non-human fascinating. Always, at the end of these stories, villagers or communities would heavily intervene and dissuade the relationship to restore the ‘proper’ social order. The human man is assimilated back to the community, disillusioned with his so-called amoral relationship with the non-human female, whereas the female ghost is penalized by the state or religious authorities. These are not merely love stories between a human and a ghost but a prohibited love between two individuals. A Useful Ghost plays on this ghost convention. The couple in this version persists through society’s opposition until the female ghost eventually succeeds in finding a way to integrate back into society by becoming a useful ghost. However, the way to become a useful ghost is to get rid of the other useless ones and help the living maintain their lives ghost-free.

As producers, we are fully aware of the limitations and obstacles in the process of film production, as well as the friction that exists between the creative workers and the film industry. But the aim of our company is to support new filmmakers who are obsessed with exploring new forms of cinema. We believe in creating work that challenges existing beliefs and rules of filmmaking, and that engages audiences both in Thailand and internationally, to communicate new possibilities in image making and explore the cinematic language that liberates the mind and converses with the world.

We believe in creating the work that reflects the existence of our times. Also, our experience shows us the importance of cross-cultural exchange, in terms of knowledge and collaboration, and especially in international co-operation. This is in a way to prove to Thai society that the value of independent cinema lies beyond mere economic figures and statistics. Not different from most people in Thailand, who have been in the same socio-political climate and upheld the same values for decades, we are excited to be a part of this new journey. Like the burst of abscess caused by the epidemic named ambition, our expectation rises once again as we see the endless possibility in the feature film of this emerging filmmaker.

Ratchapoom Boonbunchachoke‘s first feature film is another challenging journey ahead of us. It will challenge the history of world cinema and at the same time, it will present the transition from the age of doubt to the future. One stares at the horizon with an unvivid hope, like a dream. One tries to establish new structures while removing, covering, and trying to forget the remains of the past.