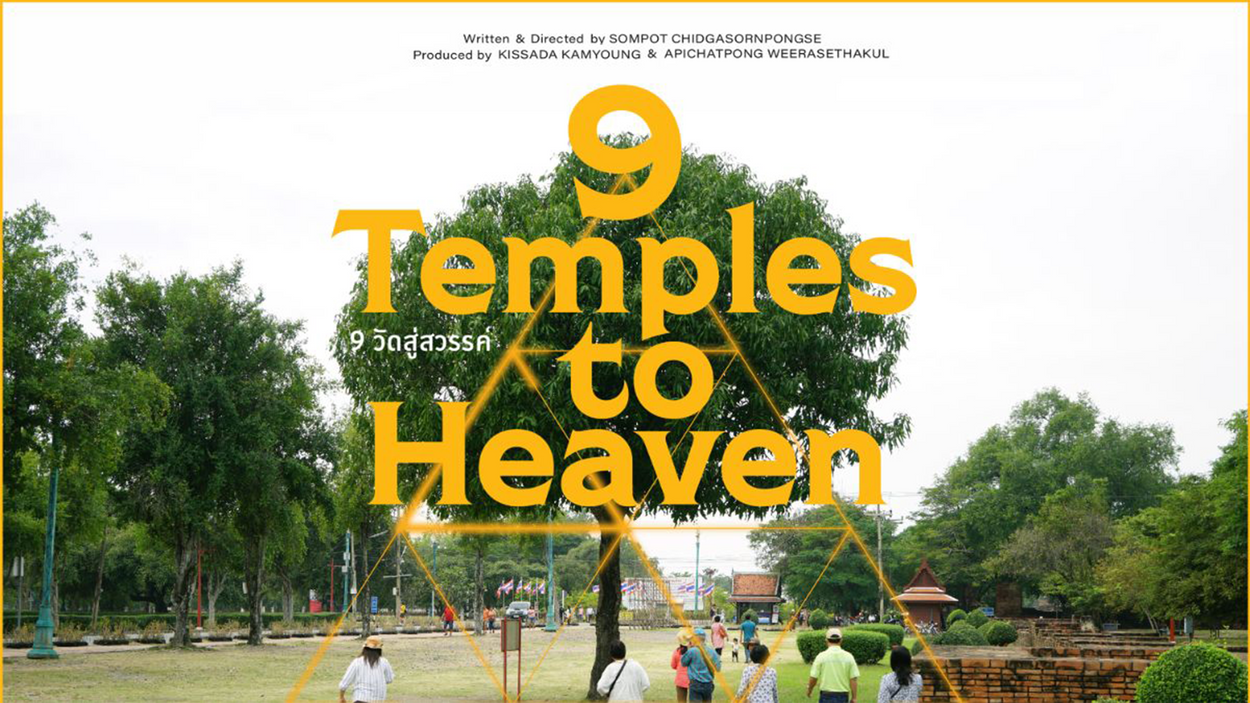 Bangkok in the Evening (Experimental documentary, 16’, 2005)

Uncle Boonmee Who Can Recall His Past Lives by Apichatpong Weerasethakul (Drama, 113’, 2010)

After hearing an alarming prophecy that his mother does not have much time to live, SAKOL (63) pro- poses a 1-day merit-making trip to 9 temples, from dawn till dusk, as a solution. Just 2 weeks before her birthday, the authoritative Sakol not only takes the grandmother of the family on this pilgrimage, but he asks the whole family to join, 9 members in total. Despite the different ages and beliefs, each person carries the promise of accumulating more good karma to prolong the grandmother’s life. The trip takes an unexpected turn when the grandmother is too tired to go on, and everyone has to decide how to continue their mission.

The film is the reimagining of my personal experiences going on these trips with my family over the years. 9 is the magic number for Thais, and many believe that making offerings to monks at 9 temples in 1 day can bring to the highest state of karma and maximize longevity. Thai Buddhism is the blend of Hinduism, Animism, and many other ideologies. However, most people from my generation only view Buddhism as a philosophy to lead a better life. This view, surprisingly, is closer to many in the west, more than our parents’ and relative’s view. This tension, the push and pull between the older and newer beliefs are seen within my family and everywhere in the world. We question our faith and fight the inner conflicts figuring out what is truly best for us. With this film, I want to create a compassionate tribute to families living under different sets of viewpoints, influenced by larger institutional powers that loom over them, may it be from religions or politics.

I have known Sompot Chidgasornpongse since 2012 and have worked with him on his first documentary feature, Railway Sleepers (Busan, Berlinale 2017). Like in many of his short films, Sompot demonstrates his unique aesthetic choices in tackling complicated social issues through unexpected cinematic forms. With his background in architecture, his films always challenge the regular film’s narrative and structure. 9 Temples to Heaven is both an extension of Sompot’s previous works, and his most personal project to date. It stems from his own personal stories, while perfectly capturing the urgent and contemporary issues happening in Thailand and around the world today – the sensitive topic of faith and the conflicts it may cause. This will also be his first fictional feature, after working as assistant director for Apichatpong Weerasethakul on many critically-acclaimed films. Together with Apichatpong, who is also a producer, we will oversee the project, making sure that the film reaches its full potential.

I believe that with our focuses on family, traveling, architecture, and culture, the project has a great potential to appeal to the global audience. Up to now, we have already received support from the Thai Ministry of Culture, and Thailand Media Funds. The project won “Special Mention” Award from Talents Tokyo and received further development funding from the Next Master Program. In 2020, we partici- pated in La Fabrique Cinema, Hong Kong Asia Film Financing Forum (HAF), Produire au Sud at Nantes, and Southeast Asian Fiction Film Lab (SEAFIC). Through these platforms, Sompot has further developed his script to make it closer to his vision and is now on the 7th draft. At Open Doors, we look forward to partnerships with potential international co-producers, especially from European countries. Our plan is to apply for production funding from 2022 onwards.