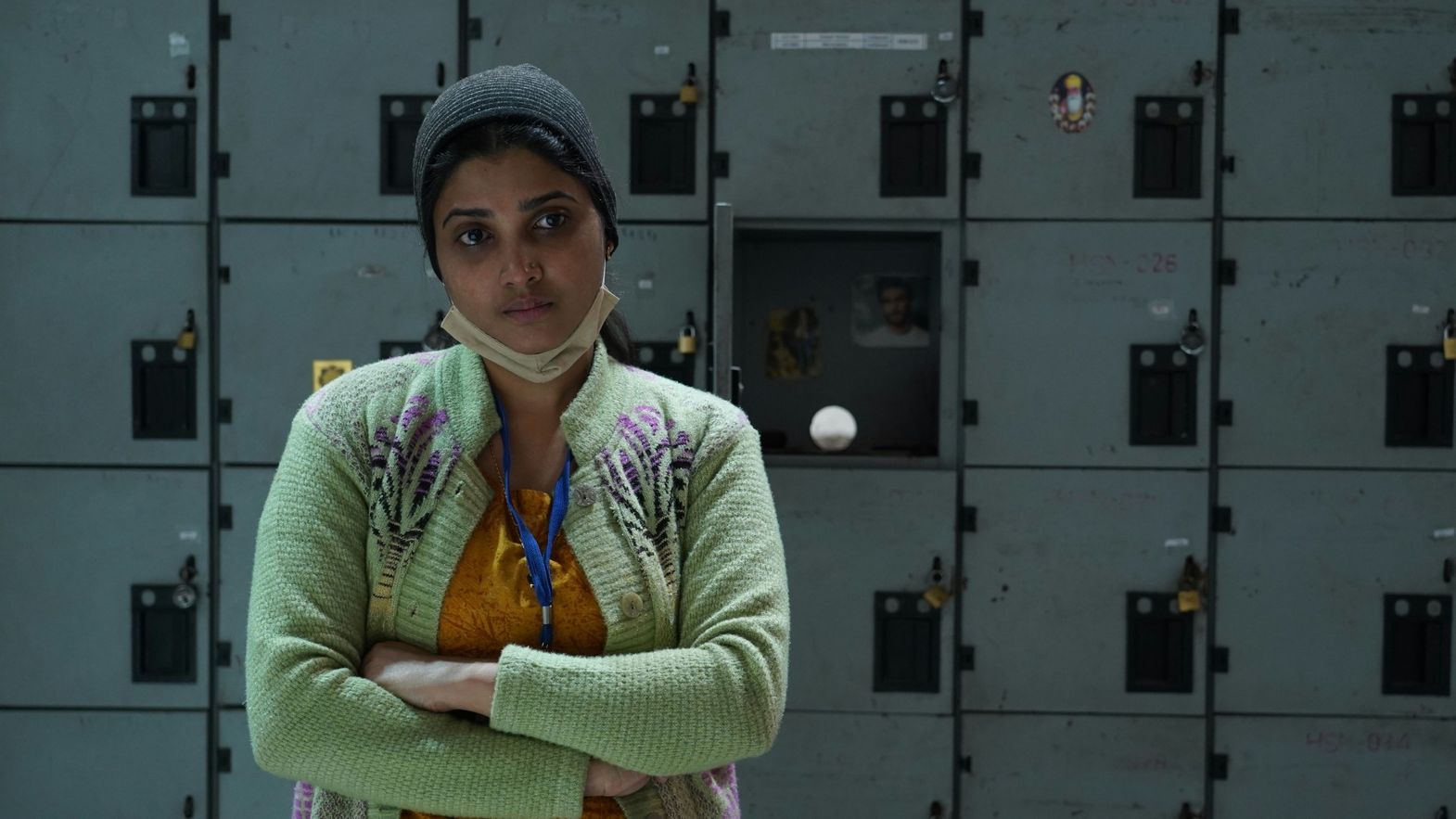 The surgical glove is a spectre that haunts Mahesh Narayan’s Ariyippu [Declaration]. Sterile, blue, and sometimes blood stained – its presence holds together Narayan’s pandemic story of shame and precarity. Each visual encounter with the glove is wrought with meaning. At times it merely serves as a reminder of circumstance and setting: the pandemic and the industries it empowered with a new lease on workers’ exploitation. And then there are moments when the glove creeps upon you – cast over plastic hands protruding from a factory machine, waving at you in an endless mechanized loop; or exhibited over hand shaped sculptures raised in perpetual declaration, decoration pieces for an office reigning over the pandemic factory.

Ariyippu is the story of Reshmi (Divya Prabha) and Hareesh (Kunchako Boban), a married couple from Kerala. They work at a surgical glove factory in Delhi, and they hope to leave their lives behind in India for better prospects abroad. The pandemic is the first catastrophe to strike. It delays the visa process, their passports are handed back to them, empty. And then, a video is leaked.

The video consists of a set of clips of Reshmi, filmed by Hareesh for a visa requirement, documenting her skill as a glove tester. But there’s another clip stitched on to the video: the face of a woman, partially covered by protective gear worn by the factory workers, performing oral sex on a man hidden behind the camera. As the world around them decides that Reshmi is shameless woman, their lives come apart. Hareesh is wrecked with doubt, certain that he never made the video, unwilling to accept Reshmi’s word that she didn’t either. And Reshmi is thrust into a fold of shame and violence, her body now viewed as the means through which truth must be sought – no longer just the property of an exploitative factory, she is now also a specimen to be examined by the police, poked and prodded for proof; punished by her husband as an escape from his doubts, beaten when that isn’t enough.

Strung through all of this is another story, of the factory manager finding ways to cheat the pandemic. He buys used, bloodied surgical gloves to sell as new. He makes cheaper quality gloves to maximize on profits made possible by an increased demand. Perhaps this secondary plotline also serves the utility of a reminder, every time it surfaces we are made to refocus our lens back on to the deeper truth of Ariyippu: not just the story of a man and a woman caught in the cruel web of a sex scandal, but the story of two workers, their lives the cost we found dismissible as we struggled to anchor in our own.

Ariyippu often feels like a documentary – shaky, hand held shots opening a window into the world of the factory, filled with sounds of machines and the dreary greys of hopeless monotony. In making this film, Mahesh Narayan has forced us to consider the ways in which the pandemic will be historicized. Which stories will we choose to tell? With Ariyippu, he draws light on a pandemic story from the margins of collective memory, from the lives of those who were not given the reprieve of a lockdown – the bodies that labored through the crisis, were profited off, and thrust into intensifying positions of precarity.

As the first ever Malayalam film to compete at Locarno, Ariyippu boasts stellar performances, and proves an urgent and necessary watch. Here’s hoping that in finding a launching pad at Locarno, the film is able expand the boundaries taking form around the genre of pandemic storytelling.