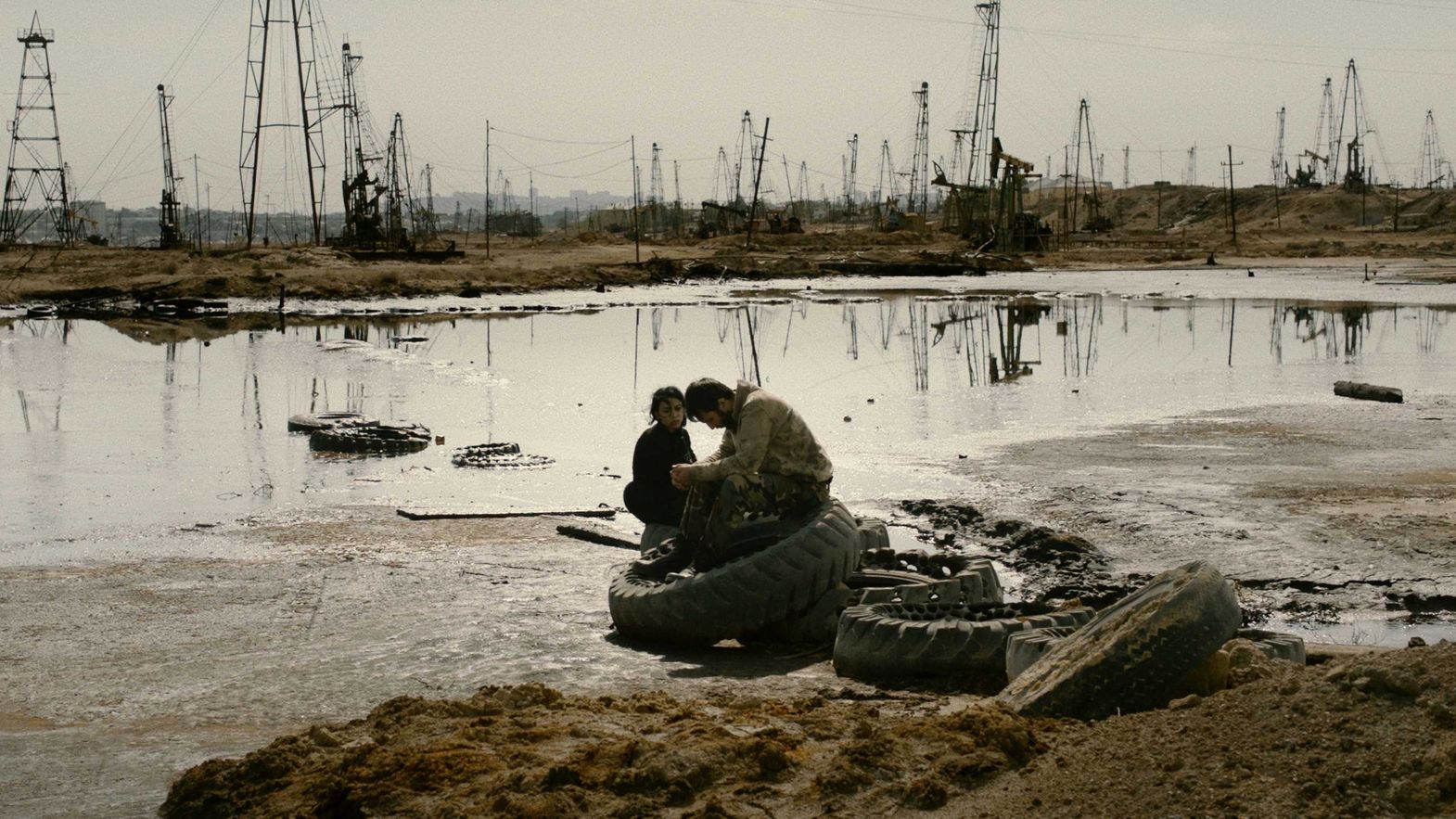 “Talk to me,” a woman asks in Balıqlara Xütbə (Sermon to the Fish), the ninth film by Hilal Baydarov. She asks it of the sun and the clouds. She asks it of the wind and the road. Alone in a desolate landscape in Azerbaijan, she cannot ask it of anyone who would be able to speak back.

When her brother returns from the Nagorno-Karabakh conflict, it is perfunctory, only in body: psychically, he remains at war. What was once home is, in any case, now void. With the exception of his sister, everyone in the village is dead. He asks his sister to leave the village, to move somewhere else with him. Refusing, the sister weds herself to lifelessness, rot and ruin. He stays, too, continuing to wear his military uniform and conversing with the fallen soldiers who haunt him.

In the forsaken terrain of the film, it is difficult to tell graves from grass. Oil contaminates the lake, the fish – all there is to drink and to eat. Fire is more omnipresent than water, often outnumbering the one or two people in the frame when it burns. Small signs of hope, of vitality – apricot-colored flowers flourishing next to a swirl of paisley on a shawl, leaves like lightly tarnished gold on a tree, the capacity for poetry even in the most desperate circumstance – dwindle by the end of the film. Azerbaijan is rich in both persimmons and petroleum, but petroleum, here, wins out.

In the Sermon of Saint Anthony to the Fish (written in the mid-seventeenth century by a Portuguese priest), fish swim miraculously to the surface of the water so as to hear the homily of Saint Anthony. In a parallel image by Baydarov, however, fish float to the surface of the lake inanimately, deaf to the poetry that is espoused in the film. While this poetry may alleviate the devastation in the film for the spectator, ultimately this poetry exhausts itself too.

In the penultimate image of the film, a long-distance, long-enduring shot asks us to bear witness to the end of language, the sermon, the talk. (That Baydarov studied with Béla Tarr, a luminary of what we now know commonly as ‘slow cinema’, is as palpable here as anywhere else in the film.) Communing on verbal terms with sun and cloud, with wind and road, ceases. Under a banner of black smoke, a dog whimpers as the word is asphyxiated and the world burns. What is left looks as uninhabitable as a distant planet. And the shot goes on and on. And it makes more than a nightmare of the image. As it lasts and lasts, it becomes an unbearable reality.

“You came back from war for this?” one voice asks the brother in the film. Come the end of the film, both brother and sister withdraw from the world in which they find themselves, seeing little in ‘this’ with which to survive, and less for which  to live. If Azerbaijan was victorious in the Nagorno-Karabakh conflict, then it was only a battle won; a war on a far larger scale is, Balıqlara Xütbə tells us, being lost.