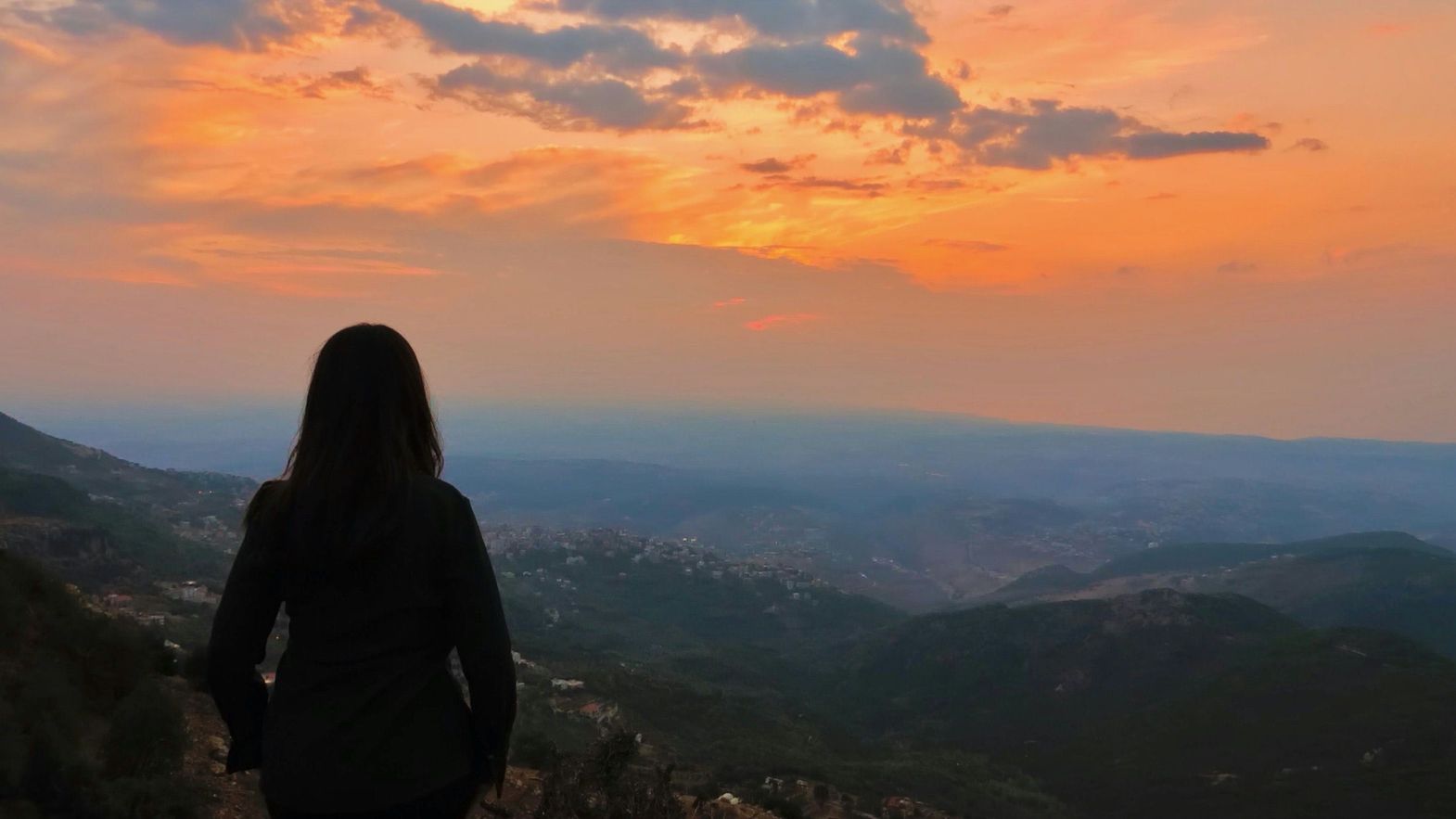 The home is a sanctum of peace in Abbas Fahdel’s new work Tales of the Purple House (“Hikayat elbeit elorjowani”). It is here, in this independent house in the south of Lebanon, that Nour Ballouk, Lebanese visual artist and the filmmaker’s wife, spends her days surrounded by canvasses, films and her four cats – Sukker, Antar, Kiwi and Panda. The sun shines down on this quiet haven, the gardens are bountiful and Nour devotes herself to painting nature.

Yet the world is too much with the Fahdels. The Edenic stillness is interrupted by news reports about the 2019 anti-government protests, the 2020 Beirut explosion, the COVID-19 pandemic and, later in the film, the Russian incursion into Ukraine. Moussa, a young Syrian immigrant who visits the Fahdels regularly, is a reminder of the unrest outside, as is the bevy of sanitary workers spraying daily disinfectants in the Fahdel compound.

Like Fahdel’s monumental work Homeland: Iraq Year Zero (2015), Tales pits the intimate against the historical, whittling down the world to the size of individuals but also examining the individual as a creature of history. Yet in the new film, the distance between the two is more strained. While the imminent “war” had already become a fact of everyday life in Homeland, the domestic space in Tales is eerily insulated from the tumult outside. Fahdel’s film is about chasm between the here and the elsewhere, the need to carve out a personal space and the desire for political action.

At the heart of Tales is the question of the role of art and artists in the face of existential and political threat. What does it mean to paint trees and flowers and hills and beaches at a time when humankind possibly stands at the brink of extinction? Nour’s paintings may reveal a hidden desire to bask in the permanence of nature – outside time, outside history – a tendency equally found in the films of Andrei Tarkovsky that the Fahdels watch. But as her feline friends demonstrate over and over in the film, there is no escape from the violence in nature.

Tales overflows with shots of domestic animals, and interspersed with footage from protests or warfare, they evoke a different perception of history. The linear timeline of the protests, pandemic and wars come crashing against the seemingly timeless nature of the film’s non-human characters. Seasons come and go, city squares fill up and go empty, but the cats – as though in cosmic indifference – continue to huddle or hunt smaller critters for fun and food.

Nour, however, is not a cat, and her relationship to her home and herself is necessarily mediated by history. Bombarded by the horrors besieging her town, she is doomed to lean back on memories, to wait evermore for the bird of her childhood. “The wars have created an attachment to the land,” she reflects as she paints a landscape. Death hangs heavily over the film, dedicated to “Those Who Have Left and Those Who Stayed,” and Nour’s musings are shot through with a melancholy about people vanishing, migrants and refugees, the killed and the deceased.

What does it mean, though, to watch Tarkovsky at the time of the Russian offensive in Ukraine? A screening of Solaris (1972) was, after all, cancelled in Spain in March this year in response to the invasion. A cinephile and an erstwhile film critic, Abbas Fahdel regularly shows clips from arthouse classics playing on his TV in Tales, inserted in rhyme with preceding shots. At one point, a sequence from a Tarkovsky film is jarringly spliced with an infographic about the war. Fahdel, whose production house is named after Tarkovsky’s Stalker (1979), seems to be reminding us of art’s subordination to history. Like Nour’s personal, mental images of Beirut, our perception of the films we love are necessarily coloured by the circumstances of their (re-)viewing. Our original, magical encounters with them are obscured, if not downright violated. There is, alas, no purple house of the cinema.