From Today until Tomorrow 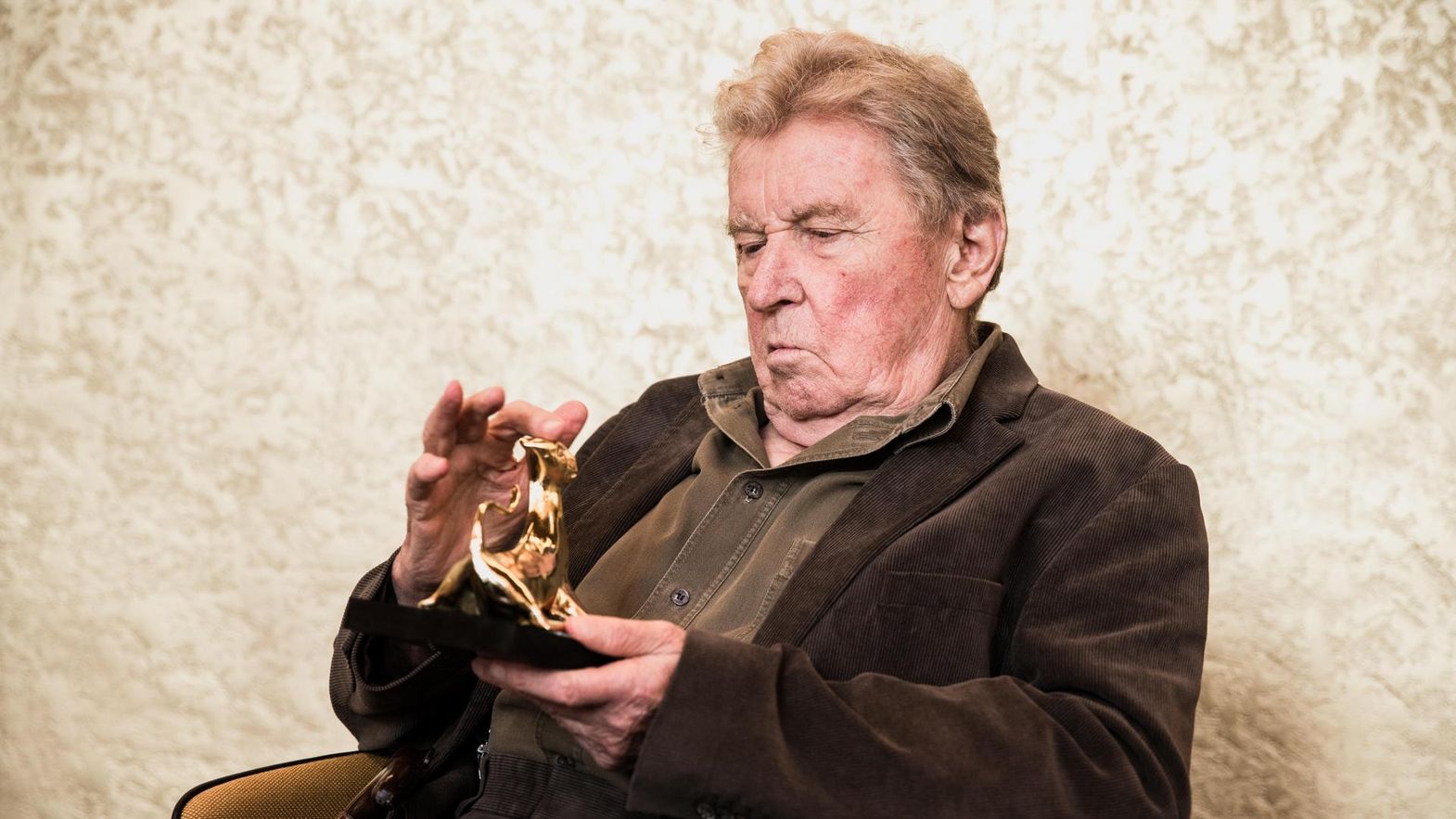 That of Jean-Marie Straub and his lifelong partner, Danièle Huillet, is probably one of the most remarkable political, artistic, and human parables in 20th-century cinema. Straub and Huillet's cinema, an inseparable binomial, in its obvious, humble power, drew a line that led from John Ford to modernism of the most driven kind. A clarity in observing and staging sounds and images that was always misunderstood due to the presumption of a cold exactitude and ruthless lack of warmth; instead, their ethos was strong and lucid, a generous sentiment, irreconcilable with the logic of a cinema anchored only in its commercial methods.

In the last years of his life, Straub had joined his friend Jean-Luc Godard on the Lake Leman, in Rolle. Barbara Ulrich was close to him, as the desire to make films remained strong as ever, as evidenced by La France contre les robots, based on Bernanos, shot a few meters from his home. A vast nine-minute film that interweaves the origins of cinema with a cell phone fragment.
Truly, now, silence has fallen on Rolle.

The path of Jean-Marie Straub, who lived and worked with Danièle Huillet – she passed away on Oct. 9, 2006 – was suggestive, in its singularity, of the history of cinephilia and the European Left, reverberating in the heart of the struggles and contradictions of the 20th century.

He was born in Metz, at the time part of Germany. Learns German, becomes antifascist and grows very close to François Truffaut. He begins writing for the Cahiers du cinéma. He takes his very first steps in cinema as an assistant to Jean Renoir (Elena et les Hommes) and Robert Bresson (Un condamné à mort s’est échappé) and, above all, he works alongside Jacques Rivette when the latter produces Le coup du berger, his debut.

The war in Algeria forced him to take refuge first in Amsterdam and then in Munich, for which he would be convicted of desertion in absentia.

Since their debut, with Machorka-Muff, based on Heinrich Böll, there is evidence of that attention to the relationship between sound (intended as word and beyond) and image, on which critics such as Serge Daney would write essential, unavoidable words. Also, by Böll, they made the medium-length Nicht versöhnt oder es hilft nur Gewalt, wo Gewalt herrscht (Not Reconciled). In 1967, they would sign their masterpiece Chronik der Anna Magdalena Bach (The Chronicle of Anna Magdalena Bach). Starring Gustav Leonhardt, the legendary harpsichordist, Chronik der Anna Magdalena Bach is probably one of the truly unmissable films in the history of cinema, a piece of work that stages the possibility of seeing (or how to see) music and image - together. In the same year they collaborated with Rainer W. Fassbinder and his theater company by working on a text by Ferdinand Bruckner, Krankheit der Jugend, from which the short film Der Bräutigam, die Komödiantin und der Zuhälter (The Bridegroom, the Comedienne and the Pimp), starring Hanna Schygulla and Fassbinder himself, would later be made.
All these works, a sign of a political force, vitality, and strength still unsurpassed today, form the basis of a body of work whose influence will reverberate profoundly in the 1970s and beyond, influencing personalities such as Pedro Costa (who will make the magnificent Où gît votre sourire enfoui? with Straub-Huillet), Joao Botelho, Jean-Claude Biette, Joao-Cesar Monteiro, Michel Khleifi and many more.

In the late 1960s, Straub and Huillet move to Rome, where they will live for a long time in Trullo, the working-class neighborhood. Here they would forge a fruitful relationship with critics and friends such as Adriano Aprà, Marco Melani, Enzo Ungari, Enrico Ghezzi who would support their work by buying their films for Fuori orario, Roberto Turigliatto, Piero Spila, the magazine Filmcritica – whose director Edoardo Bruno always defended their work and created the opportunity for long and deep conversations – and the newspaper Il Manifesto, in whose columns Roberto Silvestri would lash out against the decision of the ministerial commission (on October 12, 2001), led at the time by Gian Luigi Rondi, to deny the film Sicilia! the “certificate of quality”.

And it is through this Italian network that the work of Straub and Huillet becomes a fundamental part of the education of a non-generation of cinephiles who will look to them as an important model of work, ethics, and politics.

Their films, Les yeux ne veulent pas en tout temps se fermer ou Peut-être qu'un jour Rome se permettra de choisir à son tour (Eyes Do Not Want to Close at All Times, or, Perhaps One Day Rome Will Allow Herself to Choose in Her Turn), Moses und Aron, Dalla nube alla resistenza, Fortini-Cani, Trop tôt, trop tard (Too Early/Too Late), Klassenverhältnisse (Class Relations), intertwined with Corneille, Schönberg, Pavese, Kafka, respectively, are the sign of a profound dialogue with the reasons of history and cinema, the classical beauty of which is, today more than ever, undeniable. And it is precisely in the film based on Pavese, where the words "You are everything in the gesture you make" uttered by Nephele towards Issione, in the first of the Dialogues with Leucò, words that resonate deeply, that we find perhaps what can be considered the poetic declaration par excellence of Straub and Huillet's cinema: a human being, like Issione, is in his own actions. A precise gesture. A precise film.

During Jean-Marie Straub's last Roman years we budding critics had the opportunity to observe Straub closely, probably without ever fully grasping the importance of the man and his work. His Franco-German accent was the unmistakable sound of conversations that were deep, ruthless, and ironic. Like the time in Filmcritica's Piazza del Grillo headquarters, when he revealed that he was also interested in Robert Altman's Dr. T & the Women, taking us all by surprise. Straub was capable of gestures of timeless tenderness. Like bringing in a gift of grapes for a conversation; they would never be called interviews with him. Or when, completely by surprise, he would phone to say that "You're all right politically," because he had appreciated what I had written on Operai, contadini (Workers, Peasants). We would always listen captivated when Straub would talk about cinema, weaving threads between Ford and Stroheim and Mizoguchi. He saw very clearly, Jean-Marie Straub, he "materialized the imagination" to quote an uncanny observation by Ghezzi. "You have to respect the integrity of the space you film."

That is why Carlo Chatrian's decision to award the Pardo d'onore Manor to Jean-Marie Straub at the 70th Locarno Film Festival was right. As was right to invite Renato Berta to present him with the Award. An unforgettable moment. Thank you, Carlo! On stage Straub quoted Hölderlin, the illness had affected but not bent him.

Jean-Marie Straub was much more than a filmmaker. Jean-Marie Straub was the undeniable sign of a possible resistance. Of a cinema yet to be made. A cinema that has often been misunderstood, sometimes even ridiculed. Martine Marignac, on the other hand, a Premio Raimondo Rezzonico winner, the most Straubian of all, has always produced the cinema of Jean-Marie and Danièle.

In the magnificent volume edited by Piero Spila Il cinema di Jean-Marie Straub e Danièle Huillet – Quando il verde della terra di nuovo brillerà, Straub, quoting Buñuel, says that one must continue to make films where everyone can discover that we do not live in the best of all possible worlds.
"When you make a film, you have to give people a taste for living, for air, for wind, and for life."
And yesterday, from Piero Spila, I get a message - Straubian - in its precision: "Jean-Marie will be missed by those who deserve him."